Should Wasps Nests Be Removed?

If you have any questions of your own, please simply contact us via our email form below

Only a professional pest control company should remove wasp Nests. They know what they are doing and will have all the protective clothing and equipment to enable them to remove your wasp nest safely.

Wasp nest removal is difficult and dangerous if you don't have relevant experience and protective equipment. Wasps are extremely aggressive and protective over their nests, which can result personal and property injury.

Wasps can nest just about anywhere as long as the chosen area can support the nest's weight and enables them a comfortable abode to feed and bring up their larvae. Queen wasps tend to pick places higher up to that they can easily hide from predators. They nest in gardens and sheds, up in attics and loft basements, gutter and roof linings, and any cracks or gaps in wall cavities.

Look out for wasp activity and nests in any area that could provide a discrete and sturdy place, such as trees, bushes and holes in the ground, for them to lay their eggs and hide from predators.

Wasps nests can eventually die out if untreated; however, before that, the colony will have produced hundreds of fertile Queen wasps that will hibernate and start building their nests within the coming year. Nests get larger as the colony grows, making swarms of wasps more dangerous as the seasons change and we move into late summer and autumn. Late summer and autumn are when wasps are at their most aggressive, and this is due to continually feeding on rotting fruit that sends them into a violent frenzy.

It's crucial to get wasp control to treat and remove a wasp nest early, as when they get aggressive, they could cause you, your family members or your employees to get stung by them, which may result in a painful allergic reaction that could kill. Wasp nests can also cause property damages in your home, or the wasps could even begin to stain or even eat their way through the building's wood or walls and destroying it.

Trained professional pest control treatments are needed to treat wasps nests. We do not recommend DIY nest removals as many are unaware of the risks and precautions that apply. Pest controllers and exterminators may use their high-quality insecticide products to spray on treatment. Nests mustn't be removed immediately after a treatment because worker wasps can often return and attempt to re-build their home. Experts are required when removing a nest, as they have the correct protective clothing and specialist products.

If untreated, Wasp nests often disappear independently; as their colony expands, new Queen wasps will move on and form nests of their own elsewhere.

Wasps are more suited and attracted to warm weather. Queen bees will begin building their nests in the spring and start feeding and breeding their young inside the nest in the summer. Therefore, they last for around 3-4 months if predators don't attack them unless a queen decides to move, and then they will usually follow suit. When the temperature starts dropping as they move from autumn into winter, the number of wasps will also. Wasps generally live a lifetime of about 12-22 days if they are female, male wasps tend to live much longer, and queen wasps can live up to around a year if they hibernate well. It is not rare, however, for a wasps nest to last them the whole summer.

Wasps tend to die off in cold weather when queen wasps are left unexposed or unprotected to many predators without their workers or nest. Their nests may also become unusable when summer ends.

Once the summer season ends, they abandon their nest, and the queen wasps often hibernate for a year. They may still be drawn near the same area when building their next nests if their season was successful, and they found a site that provided many shelters for their larvae. Come the following spring, and the queen will begin her search or building her new nest to lay her eggs for the process to start again.

Best Way to Get Rid of a Wasp Nest

If you intend to get rid of a wasp nest, you must take many precautions and do the steps as accurately as possible to prevent any potential risks. We advise that when removing a wasp nest, you make sure there is always a point of exit close by and plan your exit if the wasps become violent.

The best time to attempt a DIY removal is at night time. If you aren't an expert or pest controller, the best shot is at night when wasps are more docile and less likely to cause stings or attack. Wear as much protective clothing as you can and ensure that all areas of skin is covered up. Cover your hands, feet, legs, face and arms, and it may also be useful to wear goggles and shield your eyes.

Avoid any light sources as best you can, including lamps or torches; insects often are attracted to the light, which could make the wasps alert and highly aware of what you are doing. Keep others away from the nest if you are working on a removal. Children and pets must be as far away as not to endanger them; if the nest is inside, keep them in another room or outside the building and vice versa. 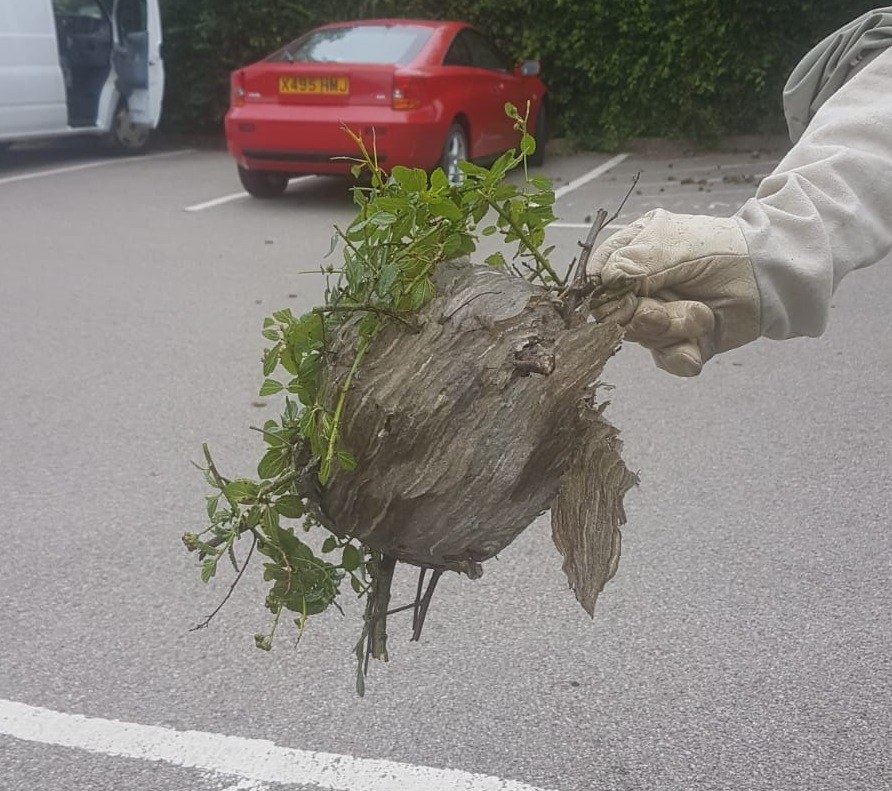 Are you looking for Wasp Pest Control in Bedfordshire and Hertfordshire? We provide a 24-hour service to aid you in any pest problems and issues you may be facing!

For your free, no-obligation quote

ASAP Wasp Removal have years of experience in all aspects of pest control, including rodents, insects and birds. Wasp nests are dangerous if left untreated, so if you think you may have a nest on your property, please contact us immediately for professional advice and treatment.